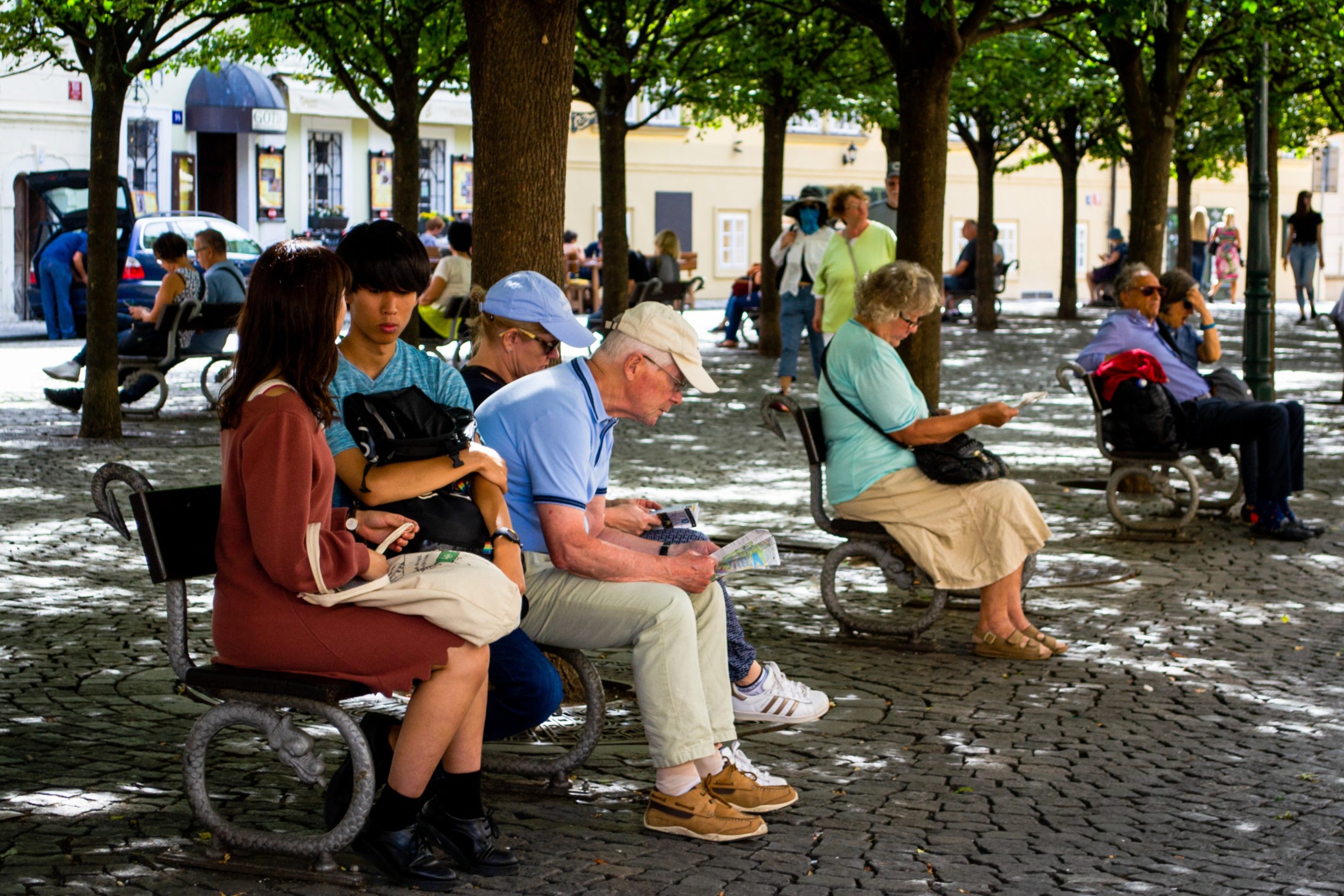 What’s your major, and one of your favorite things about it?

I am a graduate student in the Screenwriting MFA in the College of Communications. I really love it, it’s opened up how I talk about things I care about and really articulating my passion for film and film construction with other people. It’s honestly something I’d never considered before I came here. In undergrad, I studied literature, and as a continuation of that, it still sort of surprises me, it feels organic.

Do you have a favorite class that you’ve taken?

My first semester here I had Film Theory and Criticism (CTVA 515) that covered a lot of territory very quickly. I’ll shout him out by name – Professor Desser; I loved his style and rapport with us. It broadened my thinking as far as socialist film theory, which I’d never really talked about.

How did you first hear about Titan Radio?

I slept through the first Discoverfest so I slept through a lot of the notices for it, but I did radio in undergrad at WKCO 91.9 in Gambier, Ohio. I was genuinely just curious about it, I’d heard about one of the meetings. I can’t articulate how or when I knew that beyond working with the Titan Radio crew that they were friends, but everybody was very welcoming. It had an effect. It got me and it kept me!

Do you have a favorite thing about Titan Radio/being a DJ?

A big part of the different shows I’ve had here has always been about trying to bridge some degree of my parents’ music, my music, and what’s happening now. It’s as much about me learning and paying attention to what’s poppin’ as it is trying to communicate what matters to me. People have always had good dialogues and just been genuinely curious. I had my 35th birthday a couple of months ago, and Titan Radio makes me feel very young.

What’s your favorite experience/memory you’ve had through the station?

I’ve loved experimenting and just seeing what works with my show, and the first time I had the opportunity to give away concert tickets, I picked a Charlotte Gainsbourg show. I knew a little bit about her music, but taking that and figuring out how I could fit music around that and play with her stuff was fun. I think she has a specific and really contemporary style, and I’d say she’s a pretty underrated artist.

My first show of last semester was the week after Daniel Johnston died and even though I knew which of his songs and covers of his songs I wanted to play, doing that was the first time I really sat down [to think about it] and though it was a bit of a gut-punch, it felt good to remember those were songs I listened to in college more than a decade ago and having it come back felt great.

Do you have another show on Titan Radio you like to listen to?

I’d have to check the name, but someone had a show Friday afternoons a few months ago, and the confidence with which she was like “I’m gonna play three Iggy Pop songs. I’m just going to play what I want to hear and if you don’t like it deal with it”. There’s a ton of great stuff. I really liked the block we had last semester with Lyle’s metal show, then going into Livv and Alyssa’s show which was poppier and sort of a “women’s magazine” radio show, then going into me. I really like Sooner or Later, I think Jazz… In My Pants was a great name for a show, there are so many great names on the Titan Radio block!

How would you describe your show to someone who’s never heard it before?

I would say that the Sitting = The Nü Smoking show is a spoof on the indie radio unlicensed medical opinion programs. The title is a riff on new concerns about sitting and how we’re trying to get people moving. It’s a show for people who are curious about music and where samples come from, it’s an hour just digging in the crates.

How do you usually find the music for your show?

I try to keep up on things that are happening in music news. Elyse Weinberg died a few weeks ago and I hadn’t really heard much of it, but playing some of her stuff and seeing how it reminded me of Julie Silks and some of St. Vincent’s more acoustic songs. It’s really trying to bridge gaps like that and playing little games- the first show I ever did back in fall 2018 was really about finding connections around movie soundtracks of movies that had just come out over the summer, but without necessarily identifying those. We could use Cantopop as an excuse to play around Crazy Rich Asians, we could use Radiohead to play around with Johnny Greenwood’s score for You Were Never Really Here. I never want to draw attention to this too explicitly and be “that guy” who flaunts their ally-ship, but I’m definitely trying to bring attention to artists I haven’t heard as much, especially women or minorities. A lot of times, the stuff that gets the biggest response is Afro-punk, which has very angry women singers from the 70s and 90s.

Do you remember the first album you ever bought?

I know the first album I ever got was a Swingin’ Soul of the 60s compilation that the tooth fairy left under my pillow. I loved that, it was a great way to get into Alex Chilton, Jackie Wilson, and a wide range of stuff. The first album I probably bought with my own money was Green Day’s Dookie, that track was everywhere.

What are your top three favorite albums?

Johnny Greenwood’s soundtrack for The Master is an album in my most played on iTunes, because of the songs that he built around it, found from the time, and his stuff goes to some pretty weird places. It’s probably my favorite movie, it’s something I can watch anywhere, anytime. I really love Clipse’s Hell Hath No Fury, it came out of Virginia at a great time. I absolutely adore the Muff’s Blonder and Blonder album… RIP Kim Shattuck.

Do you have a song that you think reflects you/your life?

I will always remember getting off a shift at work late on a Saturday night and I was supposed to drive a friend back to his car, but he had also made plans to go on a date with another coworker of ours who was planning to move from New York in two weeks. Driving them around as their sort of chaperone/third wheel and dropping them off in Palos Verdes and driving back on the 405 as the sun was coming up, this Jenny Lewis song called The Voyager came on the radio and it just seemed like the perfect snapshot of the moment. The song was tremendous in its resonance. Without even trying to, I’ve managed to see Jenny Lewis three times in concert… Jenny Lewis, if you’re reading this, you’re my guardian angel and you don’t know it yet!

What’s one interesting fact about you?

In addition to being a Screenwriting major, I have a documentary I co-produced at the George Washington Documentary Center two years ago in festival submission. I’m very proud of it. I also have a web series I wrote and worked on set for called Correspondence, it’s on YouTube through Misfit Picture Shows. I’d love to know what people think about them!

Do you have any crazy concert experiences that have stuck with you?

I’ve gone to a lot of rap shows and hip-hop concerts and I love the crowd energy that someone can summon just by talking, it’s remarkable. I was at the Howard Theater in D.C. two years ago for a Redman and Method Man concert, and in the middle of one of the last songs, and somebody at the barricade at the front of the stage started having a seizure. Method Man dropped his mic and dropped everything and grabbed him, scooped him on stage, and they had a doctor up there in minutes. The crowd was just silent and overwhelmed, and it just proved why he’s Method Man- he grabbed the mic and said “y’all saw that? I just saved that little motherf***er’s life!”, and the crowd cheered and they kept playing for another ten minutes. Best show ever.

Listen to Sitting = The Nü Smoking every Wednesday and Saturday at 1:00 p.m. on Titan Radio!