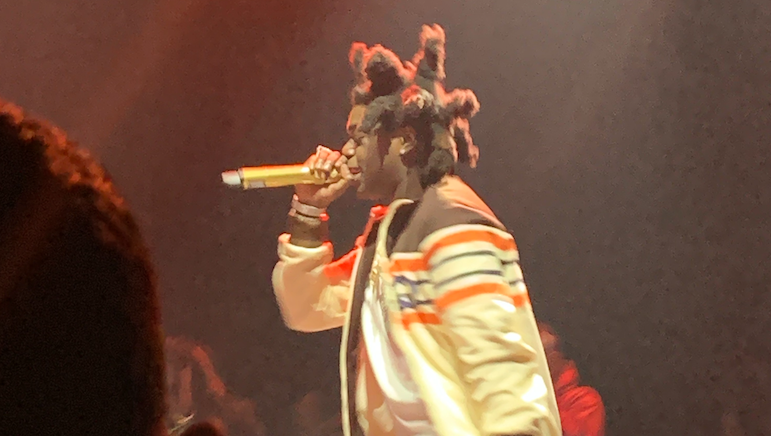 Kodak Black at The Novo

One thing about myself is that I have attended quite a few concerts in my 23 years of living. Mostly indie artists and many small backyard shows. Yet, I never managed to attend a rap show despite my love for the genre. When I was given the opportunity to attend the Kodak Black concert on February 11th I was excited and didn’t really know what to expect, especially from an artist like him. Hours leading up to the show I was learning more about Kodak and his backstory and was anticipating the show more. Kodak is definitely a character and it truly showed through this experience and his performance.

After arriving at The Novo around 7:30, and driving about an hour and a half from my house in Friday evening traffic, I was ready for the show to start and waited excitedly as the DJs played rap mixes and amped up the crowd. Various rappers opened for Kodak until about 10p.m. One thing I found interesting and kinda annoying was that all the DJs would literally replay the same songs they just played. I heard Blow the Whistle about three times, but I don’t think it mattered since everyone around me in the crowd were enjoying their drinks and spilling them as they danced each time the song was played.Everyone was anticipating the arrival of the beloved Kodak and the crowd was getting quite hostile and booed the other openers. I felt really bad for one rapper whose equipment failed him.

Several minutes of dead air and anticipation passed until around 11p.m. when Kodak Black finally showed up. The crowd went absolutely berserk and there was life once again in the crowd. Surrounded by his posse on stage, Kodak gave quite a performance to say the least. Some highlights for me were Kodak’s performance of Tunnel Vision of course and No Flockin’ which he dedicated to all the “true/O.G. fans.” As an early fan from 2015 I went absolutely insane for these classic Kodak songs. At about 12:00 I could barely feel my feet anymore from standing and saw enough of Kodak showing off his grills in his classic pose. I was disappointed that he didn’t play his classic love songs for a Valentine’s weekend show like Honeybun or Heart Mind. But, then again I did leave early to grab a Happy Meal from McDonalds before they closed. Which was a good call because 1.) I was starving and tired and 2.) Kodak actually got shot a few hours after the show so the vibes were kind of off. Overall though it was a fun first experience and I really enjoyed his performance and the venue.