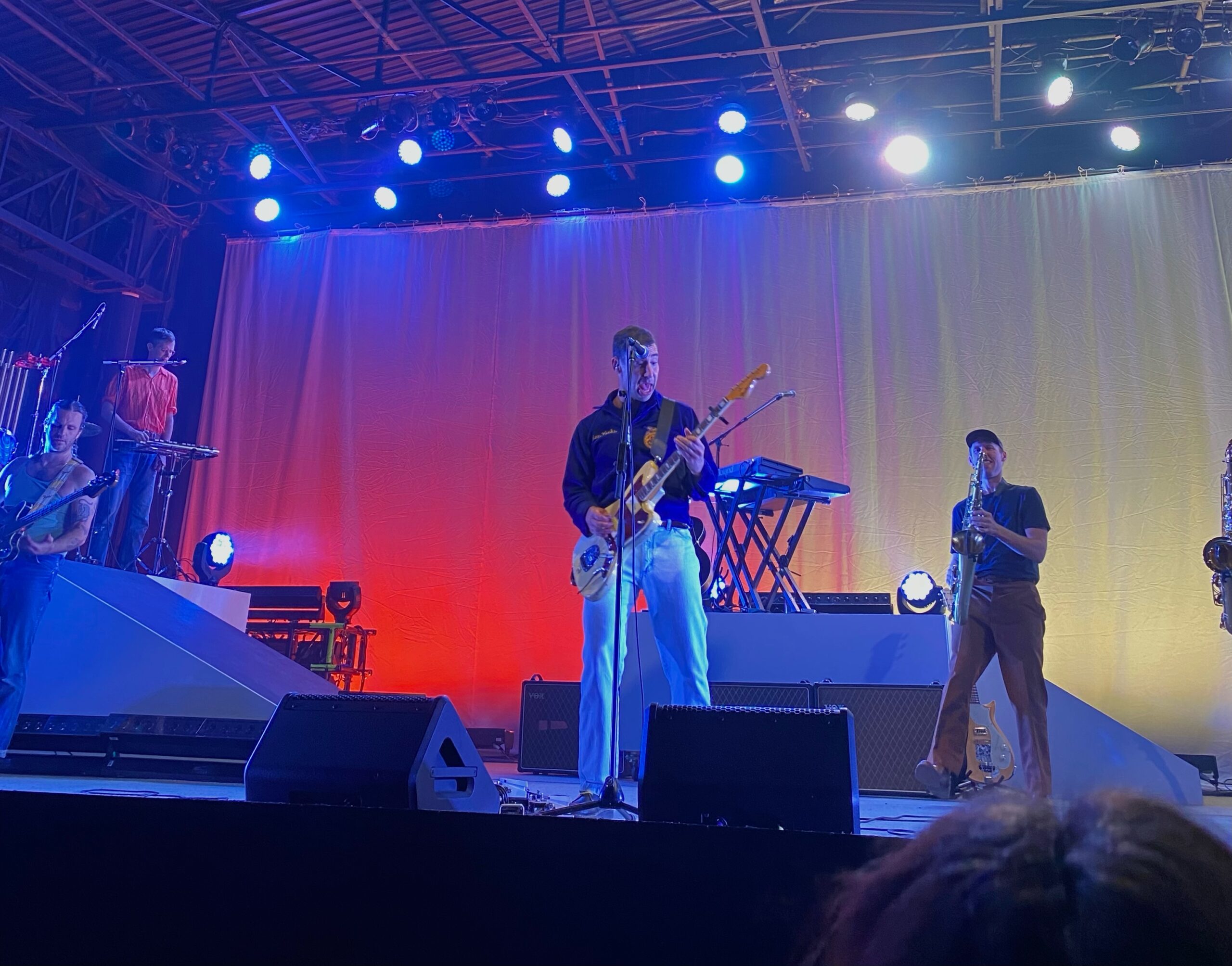 Concert Review: Bleachers at Humphrey’s Concerts By The Bay 2021

My music taste is, in all honesty, all over the place. I listen to a variety of artists ranging from Taylor Swift to Imagine Dragons to Fleetwood Mac to Nate Ruess, etc. Much of the music I listen to frequently is from groups or independent artists that don’t tour anymore or never toured in the first place, so I never really considered myself a concert go-er. The first concert I went to was Alessia Cara in Los Angeles when I was in middle school and I only went because my sister loved her so much and wanted someone to go with her. I only knew one of her songs, and while the concert was cool, I didn’t appreciate it as much as my sister did. So when my sister asked me if I wanted to go see Bleachers with her and our 2 other friends, I was a bit anxious about how my experience would go.

I knew the classic Bleachers songs like “Wild Heart”, “Stop Making This Hurt”, and my favorite: “I Wanna Get Better”. Other than that, I didn’t know all of their discographies. I knew the lead singer, Jack Antonoff, because of his work with other artists and the fact that he was in a band with one of my favorite independent artists. But other than that, Bleachers was foreign to me. However, I really wanted to go do something fun with my friends during the height of our first semester in college (that and the tickets were only 50 bucks! What a steal!) so I bit the bullet and went with them.

The concert was on October 13th, 2021, at Humphreys Concerts By The Bay in San Diego. It was a really nice, small outdoor venue. Since it was right on the bay, you could see all of the boats around you and it was just a very chill vibe. The concert started at 7 but we got there around 4ish because we wanted to wait and try to get a barricade since it was general admission. When we got there, there were only 5 people in front of us waiting, so we sat down and passed the time playing games, making tik toks, and just chatting. When they started letting people in at 6, my sister and friend got merch while I ran to barricade. Although we didn’t get right in front of the barricade, we were just behind the people we were in the front, so it was still a great spot!

The opener for Bleachers was Claud, and although I had never heard of them, they were pretty good! Definitely set up a really good vibe before Bleachers came out. When Bleachers did finally come out around 8, the crowd went CRAZY. They started off the show with “Let’s Get Married” which is one I actually knew because I prepared for the concert by listening to their albums for a week. It was a great way to start off the concert. The energy from the crowd was incredible and the entire time you could just tell we were all so happy to be there. I also liked how Jack Antonoff took time between songs to introduce the rest of the group and also talk to the crowd a bit. It felt super personable for a concert and he was feeding off of our energy so much, which meant he was going CRAZY during a lot of intense songs. He was jumping up and down, running around the stage, and just jamming out on his guitar.

The night ended off with 3 of their most popular songs, one of them being “I Wanna Get Better”. By this point, the energy was just electric and as soon as we all heard the first note we freaked out. The final song played was from their new album “Stop Making This Hurt” and it includes a lot of saxophones, so the saxophone player (forgot his name but he was so talented) kept on going and going because we didn’t want it to end. But sadly, all good things come to an end, and we left the venue very satisfied around 10:30.

I had a wonderful time listening to Bleachers perform, but a highlight of the concert was definitely the people around us. All of the concertgoers were EXTREMELY nice. When my sister and I went to get drinks for our group, it was very easy for us to get in and out of our spots. We also made conversation with some of the smaller groups around us and we all bonded over being at the concert, amongst other things.

A particular moment that stood out was towards the end of the concert when a group of girls cut in front of everyone towards the front barricade to try to get a better view. Now, this isn’t fair, because we waited for hours to get these spots while they didn’t. Another issue was that they were separating me from my friend group, so I was behind them while my friends were in front. I was a little bit antsy to say anything until another girl next to me tapped on my shoulder and said “Aren’t your friends over there?”. I nodded and said, “yeah but these girls cut me and I don’t really know what to do.” Then, a bunch of people started telling the girl group to move and go back to their spots since it wasn’t fair and they helped me get back to my group. No drama occurred or anything, it was a simple process and I was surprised how they took the time to stop watching the concert they paid for to help me out.

So, combined with the awesome music from Bleachers and the kind, fun energy from the crowd, I can say with confidence that Bleachers has been one of my favorite concert experiences thus far and I cannot wait to hopefully see them again in the future!