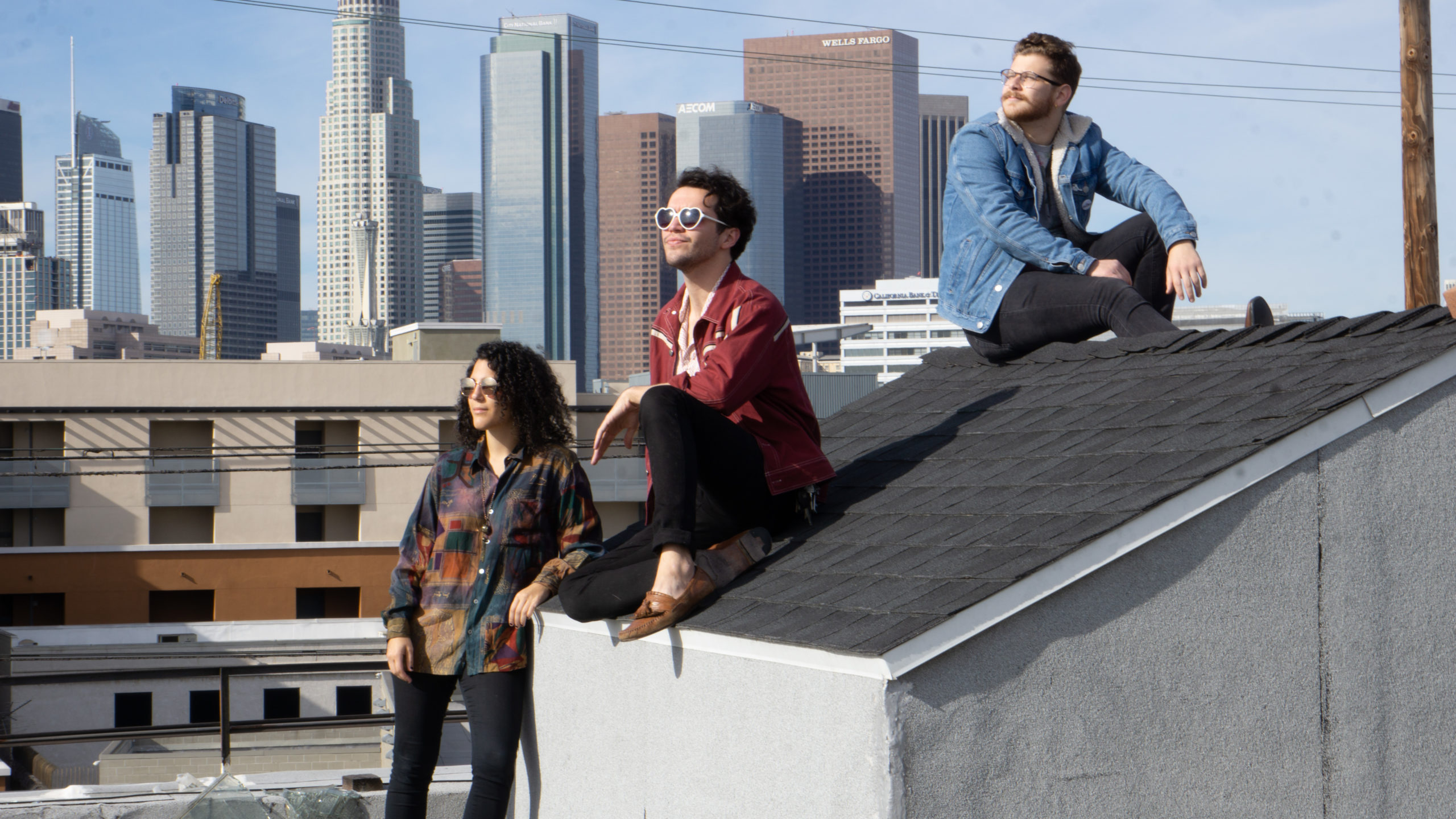 Up and Virtual with The Haunts

I recently changed my Instagram account from private to public, I always thought my page and life were boring, but since the change, I noticed a lot of traffic toward my page including a band I had yet to hear of.

Los Angeles based upbeat wavy indie rock band The Haunts liked a few of my pictures and after looking through their profile and music led us to have a chat over Google Hangouts. Sad to say this is how life is now, normally I’d invite a band out to coffee or for a beer but now I have to settle for virtual chats.

The Haunts are made up of three members, drummer Alanna Swadlow, Guitarist Aaron Britman, and vocalist Max Collier. Each member comes from a slightly different background to mesh in with this wavy surf rock mixed with an indie alternative rock feel.

The band was on the rise just coming back from a NorCal tour and had a few shows booked in April in May, including a release show at The Smell. But, go old COVID-19 has put a halt on everything at the moment.

After talking to The Haunts, which was nice to have some type of social interaction, they were such a genuine and personable group of people I’ve gotten the chance to talk in a while. For only being a band for just under three years, they have a chemistry together that is hard to explain, let’s just say they found each other for a reason besides putting out some jams.

Below is an interview we held over webcam.

So, just skimming through the internet I read that you (Aaron and Alanna) held auditions for a vocalist, but almost gave up at one point and considered just going instrumental?

Aaron: Yeah, I think the right vocalist in this city just feels like the pursuit of this isn’t the right fit, but maybe we’ll take you because we’re so desperate.

Max: And then they found me.

Max: That’s what they say now.

Alanna: We had a ton of crappy auditions, and I was just at the point where we have to play so we’re just going to go us (Aaron), and literally the last person and Max came in.

Max: It was fun, I’ll never forget that morning.

How did you find out about the audition?

Max: Craigslist baby. At first I thought they we’re going to be some 50 year-old wacko’s because we never shared full names or photos because that would be weird.

So when I went in that morning I was like thank christ they’re normal.

Aaron: We went through everything. We have friends in bands that suggested their cousin and it’s like your cousin has never sang in his life, cool. Just going through everything we could, we tried out people that posted flyers in music stores, like it 1998 in Seattle or something.

For only being around for a short amount of time you all have a pretty decent sized following on social media and Spotify.

Max: I know we pay them a lot of money (laughs). We spend all of our money-making new Spotify profiles.

Alanna: I think it started off with friends, then playing shows and meeting up with other bands in our genre from OC, San Diego, and Santa Barbra and it just grew from there.

Aaron: We’ve all been in a bunch of different bands so it’s nice to be in a band where it’s like ‘Oh people actually want to listen to us.

I saw you on Instagram you got a bass drum from The Buttertones, is that the type of genre or scene you all want to be in or do you all have a different influence on how you want the direction to go?

Alanna: I feel like we have some of that beachy kind of sound, not 100% but it’s definitely influenced there.

Max: I’d say it’s similar to that first Buttertones album, and I don’t feel bad saying that just because it seems they definitely drifted from that mentality. But it’s just that croon, but with a rich guitar and drum. I say The Killers a lot, but not in genre and more in energy. It’s a vibe and I definitely embrace that silliness.

Alanna: I feel we all have a little bit of our own style and for some reason it just all meshes well together. I came from rock to jazz drumming and Aaron is more that garage rock.

Aaron: It’s weird because I grew up listening to Pink Floyd and all these jam bands.

Since I haven’t got the chance to see you live I watched your Stockton show on YouTube. You (Max) said you were almost too hungover to play that show, what happened the night before?

Max: That’s the real deal, I told people recently I think that was the most hungover I’ve ever been. I cried in an Uber for like 40 minutes, it was so bad, I didn’t have a drip of water in my whole body. And it was questionably the best show of the tour.

I saw you filmed Kids in the Street in Desert Hot Springs, my brother lives there, how did that shoot go?

Alanna: “We had a show the night before at Hotel Cafe in LA and I was so hungover and it was like 105 degrees. We set everything up in the bowl, and some of the skaters weren’t going to come because it was so hot and it was supposed to rain, but they all ended up coming. It was basically just a big party, everyone was skating, we had burgers, and drinks.

Alanna: You were enjoying it though

Max: Oh I loved it, it was a lot of fun, and the skateboarders man they rip so hard. Just their dynamic, they were all so supportive of each other to land these insane tricks.

Alanna: One of the girls wasn’t able to drop into the bowl, and then by the end of the day she was skating right into it.

COVID-19 has had a huge impact on the world, but also the music industry. How has the virus affected you three as a band?

Max: It blows, I haven’t seen these guys in like a week and a half and I just feel like I would much rather squash this quicker, but I’m definitely still writing and going through old material. I think working remotely and still being in contact with people is a doable and necessary thing.

But, we’ve struggled where we have some stuff we’re planning on putting out really soon and then it’s this toss-up of ‘I could put it out, but I don’t know how people are going to respond to it.’

So, it’s finding that balance of do I put it out or wait? I don’t want it to be where it seems like we’re trying to profit off this virus.

Alanna: Yeah we don’t want it to be ‘Hey we don’t give a shit about what’s going on,’ people are more worried about real-life stuff.

We’ve been in the studio for like two or three months for our two new singles coming out that we’re really excited about, and we have shows we put together for the releases. But, with everything going on in the world I think it’s best to support everyone and be there, but probably not the best time to post and say “Check out the new song.”

What can we see for the future or what do you want to do when this all passes over?

Alanna: We were working on a summer tour, so hopefully that will happen and an east coast tour for the Fall. All of our March and April shows got canceled, I’m hoping the May show doesn’t, we have a release at The Smell.

Max: But right now we can’t even plan anything

Alanna: It’s literally here’s what we want to do, will it happen, I don’t know?

Aaron: It’s cool though, to see all these bands are adapting to playing live streams, and it’s like oh damn you’re doing a concert from home.

Thank you all for taking the time to talk, any last words?

Aaron: Thank you for having us.

Max: Yeah I get to talk with people oh my god.

Alanna: This has been the highlight of the quarantine.

You can keep up with The Haunts on both Spotify and Instagram @thehauntsband.